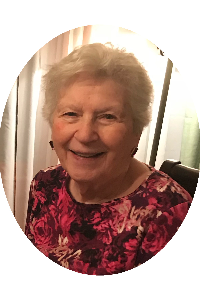 Catherine P. “Cappy” (Doyle) Muirhead passed peacefully at the Hannah B.G. Shaw Home in Middleborough MA on August 30th surrounded by her family. Born in Boston on December 2, 1930, Catherine or Cappy as she was known to her family, was raised in St. Mark’s Parish in Dorchester. She was the fifth of eight children of Donald J. Doyle and Mary Catherine (MacDonald) Doyle. Life in the Doyle family was centered around their church St. Mark’s. Catherine and her siblings attended St. Mark’s School and were faithful members of the parish. She later attended St. Peter & Paul High School in South Boston. Catherine loved outdoor activities including swimming and ice-skating and was a longtime member of the Girl Scouts. She attended summer camp through the St. Mark’s Catholic Youth Organization and thoroughly enjoyed all that camping offered.


Catherine graduated from Boston City Hospital School of Nursing as an RN and worked at several Boston area hospitals throughout her career retiring from the City of Boston Hospital System in 2003. Much of her time was spent working in the oncology department; which became her calling.


Married on Valentine’s Day, 1953 to Donald J. Muirhead, Cappy & Don began their family and moved to Weymouth where they raised seven children. The couple spent many summers enjoying time at their home near Merrymeeting Lake in New Durham, NH and upon retirement travelled between their homes in Florida & New Hampshire.

Catherine was predeceased by her husband in 2005. She is survived by her children; Mary Hegarty of San Anselmo CA, Cecile (Robert) Chase of New Durham NH, Donald J. (Barbara) Muirhead Jr of Middleborough MA, Karen (late husband David) Hussey of Englewood FL, Pamela (William Broderick) Muirhead of Abington MA, James (Donna) Muirhead of Middleborough MA, John Muirhead of Rockland MA, and Daniel White of Berwick ME. She is also survived by her siblings, Sr. Mary Doyle of Ipswich MA, Anne Kenney of Falmouth MA, and James Doyle of Gaithersburg MD. She was predeceased by brothers Fr. John Doyle and Donald (Ducky) Doyle as well as D. Joseph and Cecilia who died in infancy. Catherine also leaves 17 grandchildren, 15 great grandchildren, many nieces and nephews, as well as her lifelong dear friend Rose Munchbach. She will be greatly missed by her family and her many friends.

We would like to offer sincere thanks to the staff at the Hannah B.G. Shaw home for the loving care she received over this past year. Relatives and friends are invited to gather to commemorate Cappy on Tuesday from 1:00 - 5:00 pm at the home of Cappys’ son and daughter in law Jim and Donna; 103 Rivers Edge Dr., Middleborough, MA. A twilight farewell will be held at 5:30 pm. Her funeral mass will be celebrated on Wednesday at 11:00 am in St. Katharine Drexel Parish, Alton NH. Cappy will be laid to rest with her husband immediately following the funeral mass in the John C. Shirley Memorial Cemetery, New Durham, NH. In lieu of flowers, please offer a random act of kindness in memory of Cappy, to someone less fortunate.

Please visit devitofuneralhome.com to view an online guestbook and for live streaming.