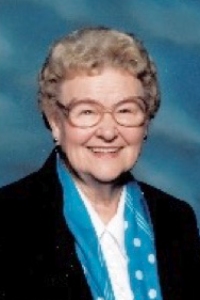 She was born on December 6, 1927 in Augusta County, Virginia to Wilber H. and Gertrude M. Coyner. Cris graduated from Waynesboro HS class of 1945, attended Valparaiso University and UNV Las Vegas. She and her husband Norton (Ben) were married in 1950 at Trinity Lutheran Church, Waynesboro VA. He was a park ranger at Shenandoha National Park, VA when they met.

Over the years they were stationed at various National Parks including Everglades, FL, Natchez Trace, MS, Lake Mead, NV and Cape Cod National Seashore, MA. At each new location Cris made a home for her family and was active in her church. She was generous with her time and energy and there was always room for one or more at the dinner table. Cris worked full time as a school teacher and concluded with a pre-school for deaf children in Wellfleet, MA. After Ben’s retirement she began a second career with child care in her home in Williamstown, MA (1977-1993).

An avid seamstress Cris was able to stitch up whatever was needed. She channeled this love of sewing into a successful craft business and was a frequent vendor at farmer’s markets in Williamstown, MA and Bennington, VT. An intrepid traveler she loved to take road trips in her RV. She moved to Bourne, MA in 2005 to be close to her son Mike and his wife Mary Anne. In 2010, at the age of 82 Cris had cochlear implants to correct her hearing loss. They were a resounding success.

Cris leaves a legacy of caring for others and a generosity of spirit. There will be a private family service in Crimora, VA at a later date. Memorials may be sent to an animal rescue organization of the donor’s choice.