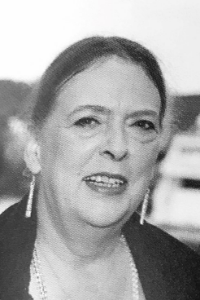 Marie L. Powers-Dube, Marie was born at Sturdy Memorial Hospital in Attleboro, MA on April 18, 1951. She died on March 20, 2021 at South Shore Hospital from complications from pneumonia. Maria was raised in the Weir Village section of Taunton and attended Sacred Heart Grammar School. She was a graduate of Bishop Cassidy High School and R.I. College.
She worked in banking for 20 years and enjoyed it immensely. She began at the First Machinist National Bank, which later became BayBank United. Marie came out of retirement and joined the team at Market Basket, opening the Plymouth store. She then transferred to store #69 at the Sagamore Bridge in Bourne and made scores of friends in the DeMoulas family.
Marie always went out of her way to help anyone in need. “Rie”, as her family and friends called her, had a great sense of humor and loved pranking others. She enjoyed designing gemstone jewelry and attended many craft fairs where her patterns and motifs were sought after. She was a devout Patriots and Red Sox fan. She and her companion cat Lulu watched all of the games together. She also loved word games and played tournaments every night with friends from Ireland and England.
Marie loved the ocean and found much solace walking on the West Dennis Beach with the love of her life, George C. Mock and her dog Geo. They also fished together at Bass River and at Horse Neck Beach. She is predeceased by George C. Mock, her parents William F. Powers Jr. and Marie Louise (Bissonnette) Powers, her nana Claire A. Walsh Powers, beloved brother William F. Powers III, and husband Arthur Dube. Marie is survived by her niece, Jennifer M. Powers Lepage and her husband, Jim; her nephew, Michael W. Powers and his wife Jen (Bourque); her great nieces, Grace Lepage and Zoey Powers, her great nephews, Jackson Powers & Max Lepage; her loving cat, Lulu; her best friends, Kathy Vale, Maureen Walsh & Kathy Penny, all who gave her physical and Mental strength.
Funeral home visiting hours will be held at the O’Keefe-Wade Funeral Home in Taunton on Thursday, April 8th from 10-11am. Burial will follow at St. Francis Cemetery in Taunton.