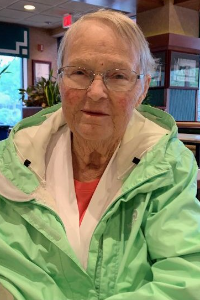 Pauline McLaughlin, 77, passed away peacefully in the early afternoon of March 22, 2021, surrounded by her family.

Although her family is saddened by her death they are comforted by the fact that she will be joining her son, Dennis B. McLaughlin II., in heaven. Pauline is survived by her husband Dennis McLaughlin, her daughter Kim McLaughlin Mangino and significant-other Scott Ciafardoni of Peabody, her daughter Pauline “Chickie” McLaughlin Boyajian and her husband Richard Boyajian of Winthrop. She was known as Memere to her six grandchildren Hayley, Mikey, Krystle, Ryan, Shealagh, and Olivia.

Pauline was born in Lewiston, ME to Melvin and Elizabeth Mayberry. Pauline was the loving sister of Nancy McDonald, Juliette Kelly, Elizabeth Conway, the late Patricia Duplin, the late Marilyn Mckeogh, the late Peter Mayberry, and the late Melvin Mayberry. She was a member of the Gainesville High School class of 1961, and an honorary member of the Winthrop High School Class of 1961, since upon graduation in Texas, Pauline immediately moved back to Winthrop to be with the love of her life, Dennis McLaughlin.

Around Winthrop, Pauline was known for her fierce loyalty, feisty personality, and incredible baked goods. Her whoopie pies were second to none. She was a caregiver to many Winthrop residents, and their children. She could often be found on her front porch, keeping watch of the neighborhood. Pauline will be remembered as a loving Mother, Wife, and Memere who was always there to protect the ones she loved.

Funeral from the Maurice W. Kirby Funeral Home 210 Winthrop St. Winthrop on Friday, March 26, at 9AM, followed by a funeral Mass in St. John the Evangelist Church-Winthrop at 10AM. Relatives and friends are invited. Interment will follow in Winthrop Cemetery. Visiting hours will be held in the funeral home on Thursday from 4-8PM. In lieu of flowers, please make a donation in Pauline’s name to St. Jude Children’s Research Hospital 501 St. Jude PL. Memphis, TN. 38105.