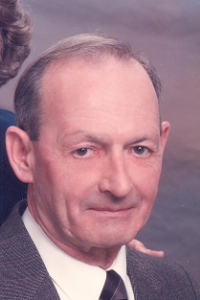 In Taunton, Franklin A. Brown, Age 91, passed away peacefully at home while surrounded by his loving family on March 21, 2021. Franklin was preceded in death by his beloved wife of 69 years, Audrey (Perry) Brown. He was born in Taunton, the son of the late Edward S. & Clara (Schindelwig) Brown. Franklin was a lifetime resident of Taunton, attended Taunton schools and was a graduate of Monsignor Coyle High School. Franklin served his country honorably during the Korean War while in the U.S. Marine Corp. He was employed for the City of Taunton as a police officer until his retirement. Franklin enjoyed sports, especially the Red Sox and Patriots, working around his home, going to the family cottage in Pocasset and above all cherished his time with family. Franklin leaves his children; Edward Brown of Taunton, Karen McGuire and her late husband John of Franklin and his late daughter Audrey Jean Brown. He also leaves his loving grandchildren; Peter Brown of Manhattan, NY, Daniel McGuire and wife Erin of Bridgewater, Amy Odom and husband Andy of Raynham, Thomas McGuire and wife Stephanie of Quincy and also five great grandchildren. Franklin is survived by his sister Josephine Smith of Taunton and his late siblings; Edward E. Brown and Beverly Fisher.
Funeral home visiting hours will be held at the O’Keefe-Wade Funeral Home, 70 Washington St., Taunton, MA 02780 on Monday, March 29th from 9-11am. Burial will be at Bourne National Cemetery at 1pm. Donations in lieu of flowers may be made to the Taunton Disabled American Veterans, DAV Chapter 57, 5-7 Taunton Green, Taunton, MA 02780.