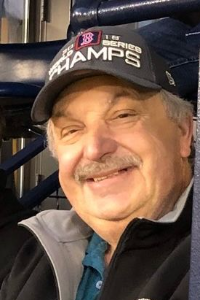 Rui M. Amaral of Winthrop passed away on March 7, 2021. He was 65 years old. Rui was the beloved husband of Deborah A. (Matarazzo) Amaral. Born in Flamengos, Azores, Portugal, he was the cherished son of the late Manuel S. and Maria R. (Do Amaral) Amaral.

Rui was employed as a furniture upholsterer. He was a member of the Winthrop Lodge of Elks #1078. Rui was an avid boater and enjoyed many years being out on the water.

Rui was the devoted father of Sarah M. Sheffield and her husband Peter and Alissa M. Amaral all of Winthrop. He was the adored grandfather of Autumn Sheffield. Rui was the dear brother of Carlos M. Amaral and his wife Maggie of Tewksbury, Maria F. Bromley and her former husband Peter of Cambridge and Manuel F. Amaral and his wife Terri of Tewksbury. Son-in-law of William S. and the late Marie Matarazzo of Medford. Rui was also lovingly survived by many nieces and nephews.

Rui’s funeral will be from the Maurice W. Kirby Funeral Home 210 Winthrop St. Winthrop on Friday, March 12, at 9AM, followed by a funeral Mass in St. John the Evangelist Church-Winthrop at 10AM. Relatives and friends are invited. Interment will follow in Winthrop Cemetery (Belle Isle Section). Visiting hours will be held in the funeral home, following current social distant and capacity limits allowed, on Thursday, March 11, from 3-7PM.