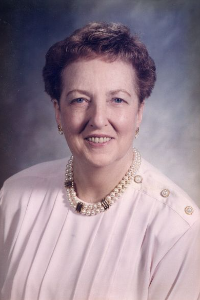 Virginia F. (Morris) Wallace of Winthrop passed away on February 23, 2021. She was 93 years old. Virginia was the beloved wife of the late Arthur H. Wallace. Born in Keene, NH, she was the cherished daughter of the late John and Helen S. (Hayward) Morris.

Prior to her retirement, Virginia was employed by the Commonwealth of Massachusetts as a tax auditor. She was a member of the International Association of Rebekah Assemblies and the Independent Order of Odd Fellows. Virginia was an active parishioner of St. John’s Episcopal Church in Winthrop and was also a member of the church choir.

Virginia was the devoted mother of Stephen J. Wallace and his wife Kathy of Winthrop, Robin A. Dix and her husband Chuck of Fayetteville, GA, James F. Wallace and his wife Idelma of Winthrop, Jodi Burnham and her husband Jonathan of Sutton, NH and Jan S. Wallace of Derry, NH. She was the adored grandmother of Elizabeth, Anne, Joseph, Julia, Katie, Jana, Matt, Corinna, Harry, Ian and Morgan and the loving great-grandmother of 9 great-grandchildren. Virginia was the dear sister of the late Theodore Kaiser and John Morris. She was also survived by several nieces and nephews.

Funeral Services for Virginia will be private and a Celebration of Life gathering will be held when it is safe to do so. Donations in her memory can be made to the American Parkinson Disease Association/Massachusetts Chapter 72 East Concord St. Room C3, Boston, MA. 02118.