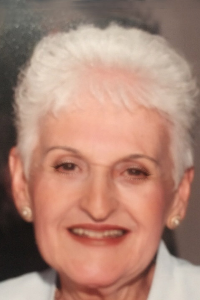 Shirley J. Curtin, age 94 of Brockton, died peacefully February 13, 2021, with family by her side, after a brief illness. Shirley was the beloved wife of 73 years to the late Peter J. Curtin. Born and raised in Whitman, Shirley was the daughter of Harold and Ruth (Corthell) Standish.

As a teenager during WWII Shirley worked as a telephone operator in the Whitman office of the New England Telephone and Telegraph Company where her soothing voice at the switchboard connected calls from near and far. After graduating from Whitman High School Class of 1944, Shirley continued her telephone career and became a familiar voice connecting callers to the famed Toll House Inn in Whitman, MA.

Shirley met the love of her life, Peter, at a Fourth of July celebration at the Whitman Park and they married in July of 1946. Peter and Shirley lived in Brockton together for over 70 years where they raised four children: Rosemary Sullivan of Cohasset: Laura Sacchetti of Bridgewater; Peter Curtin, Jr. of Lakeville; and the late June Osowski of Rutland, Vermont.

Shirley enjoyed spending time with her family, gardening, long walks, and road trips. Shirley was a gifted storyteller and her grandchildren and great grandchildren enjoyed her many entertaining stories of growing up in the Standish family. Thanksgiving was her favorite holiday and she enthusiastically shared the history of her Pilgrim ancestors and the Mayflower's landing in Plymouth. Shirley’s stories will be forever remembered along with her quick wit, smile, energy, and her love for life, family, and friends.

Donations may be made in Shirley’s name to the Lindsay A. Curtin Memorial Scholarship, 25 Faxon Street, Brockton, MA. 02302.