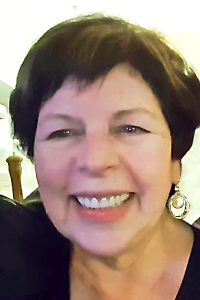 Dolores Paradise, age 73, passed away unexpectedly on February 1, 2021 at her home in Brockton, MA. She was born in Brooklyn, NY, and was a graduate of Case Western Reserve University in Cleveland, OH.

Music was central to Dolores’s life. She began to play the piano at the age of 4 and was a classical vocal soprano in her college years and 20’s. Dolores went on to perform and record music during the post-punk/new wave years of Boston’s vibrant independent music scene (White Women, Megabeat) in the early 1980’s. In the years that followed, Dolores began to write, record, and release pop/electronica music through her own music label, Shoe City Sound, in collaboration with her musical and life partner, Judith O’Mara. Her music is widely distributed via online platforms and streaming services.

Almost as important as music to Dolores were visual aesthetics. Very little made her happier than to be surrounded by appealing sights and sounds. She had a great appreciation and talent for interior design, as noted by anyone who ever entered her home. This talent and appreciation extended to the exterior, and Dolores took great pleasure and time gardening and maintaining her own landscaping. She truly had green hands and never met a plant or flower that did not thrive under her care.

But, beyond all of this, Dolores was a fun person to be around. While being a deeply private person in many aspects, she genuinely enjoyed socializing with people, had a wonderful knack for conversation, and an immense sense of humor. Dolores had an innate gift for making the most mundane situations feel celebratory. Anyone who ever had the occasion to have a conversation with her (strangers included) would attest to her uncanny ability to make you feel genuinely “heard” – a rare commodity, indeed. She will be deeply missed by and truly touched more people than she could have ever imagined. Hers was a life well lived.

Dolores is survived by her partner Judith O’Mara of Brockton, MA, her son Adrien Doherty of Somerville, MA, her sister Terri D’Richards of Henderson, NV, many nieces and nephews, and a multitude of adoring friends.

Donations in her name may be made to Musicians Without Borders