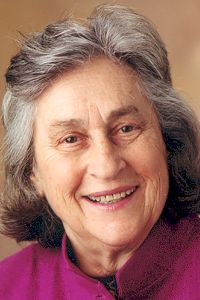 Zipporah Batshaw Wiseman died in Cambridge, Massachusetts on January 20, 2021. She was “Ma” to David and Eric; “Bubby” to Tess, Charlie and Ben; wife to Frederick Wiseman; and mother-in-law to Jennifer and Kristen.

Zipporah was born in Montreal on May 25, 1930 to Harry Batshaw and Dr. Anne Tarshis. She had a younger brother Lewis. Zipporah’s father Harry, a justice of the Quebec superior court, taught her to swim and sail at their lake house on Lac Connelly. He gave her the nickname “Tzippy” or “Chippy” by which she was known for much of her life. She was adventurous and seemingly impervious to cold water. Swimming, sailing, and skiing (which she also learned as a young child) were loves she carried throughout her life. She spoke English, French, Hebrew and a little Yiddish.

Zipporah was a trailblazer and lifelong learner. She attended McGill University where she received a BA degree in 1950 and completed the coursework for a MA in Political Philosophy in 1951. She lived and worked for a time on Kibbutz Matzuva in western Galilee in Northern Israel. Zipporah attended Yale Law School at a time when few women did. Zipporah, together with her classmate and dear friend Gloria Mandelstam, were two of only a handful of women to receive law degrees from Yale University in 1954.

Zipporah met fellow law student Frederick Wiseman while at Yale University. They married in 1955 and have been married for 65 years.

In the years following her law degree, she was law clerk to Justice Raymond S. Wilkins of the Massachusetts Supreme Judicial Court; Latin teacher at the Columbus High School in Columbus, Georgia; Staff Attorney in the Legal Department of the American Joint Distribution Committee in Paris, France; and a private practice attorney in Boston, Massachusetts representing low- income clients.

With the birth of her two sons, Zipporah took leave from the legal profession to raise her children. She was actively involved as a volunteer in fundraising for the Shady Hill School. With family and friends, she established enduring traditions of spending time at the Cape, in mid-coast Maine, and in the mountains of Switzerland.

Zipporah was an ardent advocate for those in need and a dedicated educator. She volunteered as a Supervising Staff Attorney at Cambridgeport Problem Center. She taught for more than 15 years at Northeastern University School of Law in Boston. She was a Visiting Professor at Harvard Law School; the University of San Diego Institute of International and Comparative Law, Paris, France and London, England; Boston College Law School; L’Institut d’Etudes Politiques in Paris, France; and Washington

College of Law at American University. Zipporah was also a fellow at the Mary Ingraham Bunting Institute of Radcliffe College.

In 1989, Zipporah began teaching at the University of Texas School of Law. She was an expert in commercial law. She also taught and wrote about issues in feminist legal theory. She authored or co-authored several publications related to commercial law, law and literature, and gender and the law. Most recently, she conducted research on incarcerated women’s reproductive rights. She retired in 2018 as a Thos. H. Law Centennial Professor Emerita in Law.

Zipporah was a passionate advocate for and trusted mentor to many young people. She listened, advised, shared in sorrows and celebrated achievements. Many of these relationships have been sustained through the years, developing into deep, loyal, and cherished friendships.

Zipporah is remembered by those who love her as Z, Chippy, Ma, Bubby,, adopted grandma, and beloved friend. We picture her in a comfortable chair engrossed in a mystery book or the NY Times. We remember long conversations, sitting side by side and sharing a roast chicken, a bowl of oatmeal with lots of cinnamon, a mound of clementines, or a cup of tea or coffee. She was drawn to the color red, beautiful textiles, pottery and hand carved alebrijes. We recall the peace on her face as she floated in a lake, the joy as she sailed on the ocean, the elation as she skied. We feel that fierce pride and love she held for her three grandchildren. We hear her resounding laugh and her clear voice as she calls us “my dears” and sends us off with “buckets of love.” Zipporah was dearly loved by her many friends and by her family who responded to her warmth, humor, and concern for their welfare as well as her sensitivity, high spirits and good cheer.

Burial was private. An in-person memorial will be held when possible. There will also be an online memorial gathering.

We express our deep appreciation for the hearts and hands that brought skill, compassion and care to Zipporah in the last months of her life.