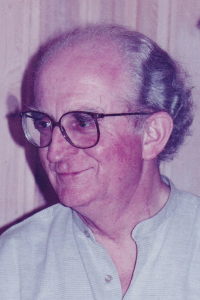 Anthony Edward “Vincent” Marron, 85, of Fairhaven passed away peacefully on Friday January 22,2021. Born at Warrington, England, he was the son of the late Edward and Agnes (Rimmer) Marron.

He was Jesuit educated until the age of 11 and completed his education until age 18 at the Benedictine Ampleforth College where he then entered the monastery and took the name Vincent. He completed a degree in Latin, ancient Greek and philosophy at Oxford University and then theological studies at Fribourg University, Switzerland. He was ordained priest at Ampleforth in 1965 and not long after was sent to St.Louis, Missouri as development director for the Ampleforth Benedictines who had established a school for boys there in 1956. After the Papal Encyclical of 1968 and much soul-searching, along with many priests, he felt unable to continue his priestly duties.

From boyhood he had an interest in the theatre. He was the proud owner of a "Pollocks Toy Theatre" and organized "theatrical productions" with his younger siblings. Michael was in charge of all things technical with Pauline and Patricia front of house!

Vincent became development director for Theatre Development Fund in New York City and opened the 1/2 price ticket booths in Times Square, Boston, Chicago, Toronto and London. He later worked as business manager for Edwin Schlossberg in New York City. After which, he was C.E.O and director for Pack Place in Asheville, North Carolina, being in charge of building three museums and one theatre. He later joined The Kenan Institute for The Arts in Winston-Salem, North Carolina. He was very proud to be director of their A+ Schools Program which integrated all the art forms into every subject in public schools in North Carolina. He was honored at their 25th anniversary of the Program. After his retirement to Fairhaven, he volunteered as director of the Fairhaven Sustainability Committee for three years.

The family would like to extend special thanks to Community Nurse and Hospice Care for the care and compassion shown to Vincent.

Due to current gathering restrictions, a private family memorial service will be held at the Saunders-Dwyer Mattapoisett Home for Funerals. In lieu of flowers, remembrances may be made to Community Nurse Home Care, 62 Center St., Fairhaven, MA 02719 or Coastline Elderly Services, 1646 Purchase St., New Bedford, MA 02740. For online condolence book, please visit www.saundersdwyer.com.