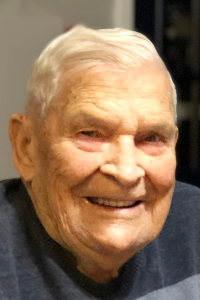 
George J. Lepine, Jr., age 94 of East Bridgewater, died peacefully at his home surrounded by his family, January 8, 2021. George was the devoted husband for 62 years of the late Eva M. (Beaton) Lepine. Born and raised in Brockton, he was the son of the late George J. and Louise L. (Dumais) Lepine.

George was a veteran of World War II and served in the European Theater, Battle of the Bulge, Rhineland and Central Europe. For 34 years, George worked as a Corrections Officer at the Massachusetts Correctional Institution in Bridgewater, retiring in 1981 as a Lieutenant.

From 1968 through 1981, he served on the West Bridgewater School Committee as both a member and Chairman of the Board. George and Eva moved to Hallandale, FL in 1982 where he became a member and president of the Park Lake, Inc. Board of Directors. In 2007 they returned to East Bridgewater.

George enjoyed bowling, playing golf and bocce. He enjoyed watching the Patriots and Red Sox games but most of all he enjoyed being with his family.

Visiting hours will be held in the Conley Funeral Home, 138 Belmont Street (Rte 123) Brockton Tuesday 4-7 pm. A Funeral Mass will be held at St. John’s Church, East Bridgewater Wednesday at 10am, followed by burial in Central Cemetery. Following COVID guidelines, masks must be worn and social distancing observed in both the funeral home and church. A maximum of 25 people are allowed in the funeral home at any one time.