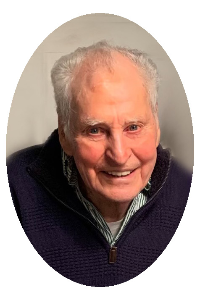 John Joseph McNeill, age 98 of Brockton, died January 1, 2021 at the Life Care Center in West Bridgewater. He was the loving husband of the late Mary V. (Booth) McNeill for 66 years. Joe was born and raised in Brockton where he remained a lifelong resident of the city. He was a son of the late John Malcom McNeill, a member of the Brockton Fire Department killed in the Strand Theatre Fire, and Anna L (Reilly) McNeill.

A 1941 graduate of Brockton High School, Joe enlisted in the US Army during WWII. He often spoke proudly of his role in assisting the troops, as a map designer, when he served in the Asiatic Pacific Theatre. He then enlisted in the US Air Force and began his career as a Sargent supply superintendent for the Air National Guard, until his retirement from the Wellesley Base in 1982.

Joe was a quiet, sweet gentleman. He was an avid reader and enjoyed discussing history and politics. He also enjoyed watching many sports, especially the New England Patriots. His family brought him his greatest joy.
His profound faith in God guided his life’s choices. Joe was a remarkable role model for all his family and friends. He had great “empathy” for others. His discreet generosity was evident throughout his life, extending to his cherished family, many friends, and to those in need.

John was the father of Maureen Viscardi and her husband Anthony; Kathleen Young and her husband William; Rosemary Bryant and her late husband David; Jo-Anne Pincolini and her husband Kenneth; Jane Ellen Bowen and her husband Richard and his beloved “Mike” (Bon Jovi) McNeill. He was the adoring grandfather of Jeffrey Bowen, Christina Deyulus, Nicole Letourneau, Lauren O’Brien, Jacqueline Roman, Kelly Young Healy, Ryan and Michael Young, Scott and Kevin Viscardi; He leaves ten treasured great grandchildren, many loved nieces and nephews. He will be dearly missed by his sister, Muriel E. Burke and sister-in-law Ruth McNeill. He was the brother of the late Mary Louise Duggan, Barbara A. Amirault and Robert J. McNeill.

At his family’s request, all services will be private. He will be buried with his beloved wife, Mary, in Calvary Cemetary. Christian services and a Celebration of Joe’s life will be held at a later date.