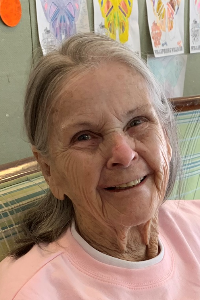 Barbara J. (Barker) Godfrey, a longtime resident of Charlestown, who also resided in Wilmington and Malden, entered into eternal life on Saturday, December 26, 2020 at Brightview Senior Living Center in North Andover. She was 87 years of age.

Barbara was born in Somerville on January 11, 1933, a daughter of the late William G. Barker and Mildred B. (Coffey) Barker. She grew up in Charlestown where she was educated in the Boston Public School system and graduated from Charlestown High School. Barbara worked for several years at Schraffts Candy Company in Charlestown as a candy maker before becoming a dedicated homemaker to her husband and children. Barbara enjoyed stopping by the Golden Age Center in Charlestown where she would play a fierce game of bingo and in her spare time she enjoyed cooking, baking, playing cards, thrift store shopping and traveling to Foxwoods. Most important in Barbara's life was her family and she cherished all the quality moments she shared with each one of her children and grandchildren.

Barbara is the beloved wife of the late retired Boston Firefighter William F. Godfrey (Engine Co. 50). She is the devoted mother of Carol Clooney and her husband Michael, Brian Godfrey and his wife Janet, Paul Godfrey and his wife Kathy, James Godfrey, Barbara Hirtle and her husband Scott and the late Robert G. Godfrey and William F. Godfrey Jr. She is the loving Nana to Lindsay, Ryan, Erin, Andrew, Lydia, Paul, Kyle, Brian, Emily, Steven, Sean and her great-granddaughters Felicia, Taylor, Brynn and Nora. She is the beloved sister of Robert Barker, Carol Barker and the late William "Sonny" Barker.

Barbara's Funeral Services and burial at the Veteran's Administration National Cemetery in Bourne will be private.

Kindly make a memorial donation in Barbara's name to a charity of your choice.