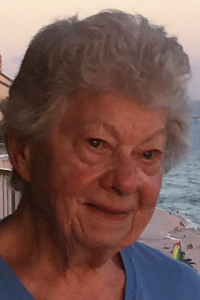 Margaret “Peggy” Dowd (Doherty) of Lawrenceville, GA, formerly of Winthrop and Charlestown passed away on October 24, 2020 at the age of 94.

Peggy was born and raised in Charlestown, graduated from Charlestown High School and went to work at First National Bank in Boston, where she worked until she married and became a devoted mother. Peggy was married to the late Stephen T. “Butch” Dowd of Charlestown. She is survived by Meg Dowd & Duane Frega of Lawrenceville, GA and Maureen & Vince Castiglione of Morristown, NJ. Peggy spent most of her adult life living in Winthrop and most recently lived with Meg & Duane. She was the daughter of the late Edward and Margaret (Shannon) Doherty and the sister of the late Honey Chaisson and the late Daniel Doherty, both of Charlestown. She is also survived by many loving nieces and nephews.

Peggy was a kind and compassionate woman who was always there when someone needed her. She loved to crochet and was known for the beautiful afghans she made for infirmed and newborn babies in the family. She was also a great baker and known for her family favorite chocolate chip cookies!

She loved the ocean and during the summer, she could be found with her extended family at either Winthrop Beach or Marshfield. Even after her children grew up and moved out of Winthrop, Peggy spent a lot of time visiting and traveling with them. Beginning on her 80th birthday, Peggy became an avid cruiser and enjoyed many cruises to the Caribbean and along the eastern seaboard with her daughters and other extended family members. For Peggy, happiness was being with family and listening to the sound of waves crashing under a setting sun. She now has a bird’s eye view of both. “Rest in peace Peggy Dowd!”

Peggy’s funeral will be from the Maurice W. Kirby Funeral Home, 210 Winthrop Street, Winthrop on Saturday, October 31, at 9AM, followed by a Funeral Mass in St. John the Evangelist Church, 320 Winthrop St. at 10AM. Relatives and friends are invited. Interment will follow at the Winthrop Cemetery. Visiting hours will be held on Friday, October 30, from 4-7PM. Strict Board of Health pandemic guidelines will be followed.

In lieu of flowers, donations can be made to St. John the Evangelist Church-Winthrop.