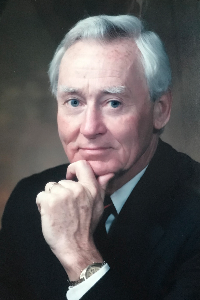 The Honorable John Walter Costello peacefully passed at home on September 11, 2020, in his 93rd year. He was predeceased by the love of his life, Ora “Orry” Ann (Kelly) Costello. As was their wish, they passed within hours of each other, holding hands until the end.

He was born on April 30, 1927 in Jamaica Plain to Attorney Walter Francis Costello and Kathleen (Brazell) Costello. He attended St Joseph's Academy, Boston Latin School, and Holy Cross Cathedral High School, and served honorably in the US Navy during World War II.

He graduated from the College of the Holy Cross in Worcester, MA in 1952 with a bachelor's degree in Political Science. While a college senior, he was elected to the Massachusetts House of Representatives to represent his childhood neighborhood of Jamaica Plain, and proudly served his constituency for five terms, while also attending Suffolk University Law School at night. He later served two terms on the Massachusetts Governor's Council.

In 1964, he ran for Lieutenant Governor of Massachusetts, aside the Honorable Francis X. Belotti, but fell just shy in one of the closest elections of that time. He remained active in the Massachusetts Democratic Party as a national convention delegate and key political advisor to one of his closest friends, the late Senator Henry “Scoop” Jackson during his presidential campaigns.

John's Roman Catholic faith was central to everything he did and said, having been a faithful parishioner, lector and teacher at St Julia’s Parish in Weston for over 50 years. John and Orry were members of the Woodland Golf Club in Auburndale, since 1963, where they were both active in leadership roles and truly adored the many friendships formed there.

Sadly, the current situation we are all in prevents the Irish Sendoff that he and Orry so richly deserved. Funeral arrangements and burial will be private, but rest assured, God willing, there will be a true celebration at a later date. Donations in his memory may be made to the Francis Ouimet Scholarship Fund for Caddies, c/o Woodland Golf Club, 1897 Washington Street, Newton MA 02466.  Arrangements and e-condolences through the George F. Doherty & Sons Funeral Home, 477 Washington Street (Route 16), Wellesley MA 02482.