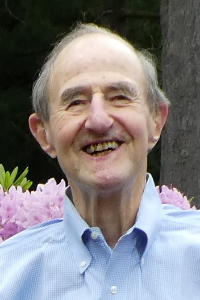 Tony was born in Budapest, Hungary in 1933, where he lived during the early years of his childhood. He then attended the British Boarding School, Oundle, after which he moved to Montreal, Canada with his family, attending McGill University and becoming a Chartered Accountant. In Montreal, he met and married Marybel and made many lifelong friends. Tony had a 30-year career with the Gillette Company, starting as an accountant in Montreal and then moving to Boston in 1968 and retiring in 1995 as Vice President/Corporate Controller. Throughout his life, he enjoyed numerous activities, including skiing, tennis, swimming, and bridge, as well as good food and wine. Tony loved the arts, including opera, symphony and the theater as well as playing the piano and clarinet. He was an avid traveler and spoke several languages, enjoying trips with Marybel to various worldwide locales. He volunteered for a variety of organizations, including bookkeeping for the gift shop at the Needham Beth Israel/Deaconess hospital and doing taxes for the Senior Center of Needham, which he continued until this year. He served on the Board of Directors for what was formerly known as the School of the Museum of Fine Arts, Boston, and was a patron of the arts and the MFA.

A celebration of his life will be held at a later date. Expressions of sympathy may be made in his memory to the Cancer Unit of the Beth Israel Deaconess Hospital in Needham or the Museum of Fine Arts Boston, or to the charity of your choice.