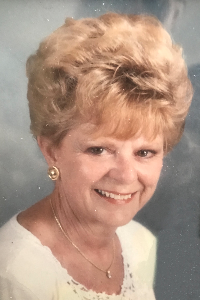 ROONEY, Elinor G. (Bradley, Dempsey) 88, of Dedham, MA passed away Sunday, August 30, 2020, following a lengthy illness. Her daughter was by her side. She was cared for lovingly by family and friends for many months.

Ellie was born October 2, 1931 in Medford, MA, daughter of the late George and Gertrude (Leavitt) Bradley. She was the sister of the late Betty Henderson and Kenneth Bradley. At 21, she married the late John (Jack) Dempsey. After his passing in 1964, she took over his business as an insurance broker, earning the respect of his clients and developing close friendships with many. She was also a highly skilled “invisible weaver,” working privately and for many tailors in the area.

Ellie later met her second husband of over 50 years, the late Richard (Dick) Rooney, at a “dial a dance” lounge. She loved to dance, especially jitterbug and foxtrot, and everyone loved to hear the story of how they met. Ellie had a love for travel, beginning when she was barely a teenager, traveling across the country with her parents and living in the desert for many months while her father served in the military. She and Dick traveled and cruised to many destinations in the US and abroad. They also enjoyed day and weekend trips to Ogunquit, ME where she would always enjoy a lobster or two. Oftentimes they would bring their grandchildren with them on their trips to Maine, taking them York Animal Kingdom, the taffy store, walking the Marginal Way, and introducing them to lobster at Barnacle Billy’s. Ellie enjoyed gardening and knitting. She loved cats, and, as all who knew her know, she loved to clean!

Ellie worked at Dedham Medical for many years as the telecommunications supervisor, retiring at the age of 75. She was a member of the Kingdom Hall of Jehovah’s Witnesses for over 67 years.

Ellie is survived by her children Janice Munchbach and her husband David of Dedham, and Jay Dempsey of Fort Collins, CO; her grandchildren, Dina Cullinane and husband Brian of Walpole, Janelle Dempsey of Somerville, Amy Phinney and husband Patrick of Hyde Park, Jodie Munchbach of Dedham, and Kyle Dempsey of Fort Collins, CO. She leaves four great-grandchildren, Nora, Lily, Ruby and Sara. Ellie was also predeceased by her daughter Pamela Dempsey.

A private memorial will be held at a later date.