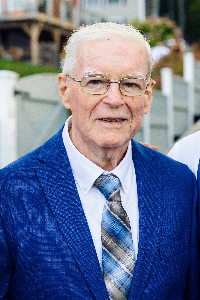 Fred was a veteran of the Korean War, serving in the U.S. Marine Corps from 1953-56. He was lawyer for Price Waterhouse prior to opening his own law firm and was an agent for several NHL players. Fred was also a member of the Cottage Park Yacht Club in Winthrop.

Visiting hours will be held in the Maurice W. Kirby Funeral Home 210 Winthrop St. Winthrop, in accordance with current Massachusetts public health guidelines, on Thursday, July 23, from 9-11AM, followed by a Funeral Mass in St. John the Evangelist Church-Winthrop at 11:30AM. Relatives and friends are invited. Interment will follow in Winthrop Cemetery. In lieu of flowers, donations in his memory can be made to St. John the Evangelist Church c/o Commitment to Parish Life Program 320 Winthrop St. Winthrop, MA. 02152.