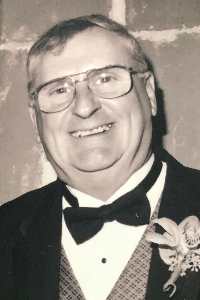 Charles A. “Charlie” Van Gorden, 80, of Mac Arthur Drive, Smithfield passed away on June 29th surrounded by his loving family. He leaves behind his wife of 54 years, Gail (O’Connor) Van Gorden, as well as his 3 children Kathleen (Peter), Kevin, and Brian (Karen); 7 grandchildren (to whom he was known as Poppy) Vivian, Jasper, Kayla, Katherine, Charlie, Cody, Brady; and his sister Nancy Faford (Ronnie) of Burrillville, RI.

Charlie was born in Worcester, MA, on May 20, 1940 and was the son of the late Charles and Inez (Rittberg) Van Gorden. Raised in Burrillville from an early age, Charlie was a graduate of Burrillville High, an Army veteran, and a proud Providence College graduate. He lived in Smithfield for over 50 years where he was a beloved football coach, active member of the Democratic Town Committee, lifetime member of the Smithfield Lodge of Elks, and member of the Smithfield Historic Preservation Commission. He was also a member of the Rhode Island Retired Principal’s Association, American Legion Balfour-Cole Post 64, and the Garfield Social Club in Central Falls where he served on several committees including the scholarship committee, which provides assistance to Central Falls High School graduates.

Charlie was an educator at Central Falls High School for 35 years, first as an American History teacher then as vice-principal and principal before retiring. Charlie loved all sports and when he wasn't watching the pros he always found time to attend his grandchildren’s games. He was an avid historian and traveled the world with his wife Gail and friends over the last few years including trips to Egypt, Thailand, Ireland, Italy, and Australia to name a few of his favorite destinations.

We all know Charlie liked to tell stories and had an unlimited supply of witty, funny, crazy sayings like “off like a dirty shirt” when he took off in the car with his grandsons to hockey camp. Always up for “a cold one”, “Chuckies Bar and Grille” was open to all and one of the ways Charlie opened his home and heart to so many. He had deep and loyal friendships from every stage of his life and will be sorely missed.

He was buried with military honors at a private funeral service. A celebration of his life will be held at a later date. In lieu of flowers donations in his memory may be made to the Garfield Social Club Scholarship Fund, 11 Hunt St, Central Falls, RI 02863 or the Smithfield Education Foundation, 49 Farnum Pike. Smithfield, RI 02917.