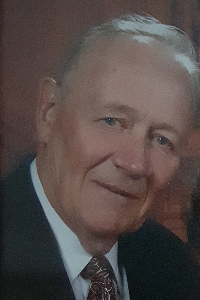 James Andrew “Andy” or “Jim” Dick, 84, of Greenville, passed away at home on Wednesday June 24, 2020 after a brief battle with cancer, in the presence of his loving family. He was the beloved husband of Carolyn (Krupka) Dick for the past 62 years, with August 3rd being their 63rd wedding anniversary.

Born in Providence, he was the son of the late Walter Dick and Alice (Kay) Dick.

Andy was the Vice President of Bank Properties and Construction for Bank of America before he retired in 1995.

Andy served our country honorably in both the United States Navy ROTC and United States Army. He worked in the Army Corp of Engineers and served for a time overseas in Germany. He graduated from Hope High School, where he met his high school sweetheart, Carolyn. He attended University of Rhode Island prior to entering the Army. An avid golfer, he played for many years in Fred’s Golf League at Melody Hill Golf Course. A modest man, he never bragged about the three holes-in-one that he scored over the years. He also belonged to a bowling league for many years. Andy was a loyal sports fan for his teams, the Boston Red Sox and the New England Patriots. His family was his whole world and he was his grandchildren’s biggest fan.

Due to COVID regulations, funeral services will be private. There will be a Celebration of Andy’s life for family and friends later in the summer.