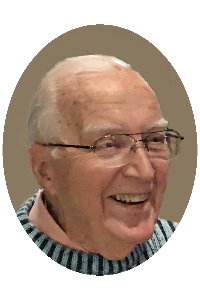 Douglas P. Halley, age 88 of Douglas, MA, formerly of Taunton and Brockton, died peacefully June 24, 2020 at UMass Medical Center. Douglas was the loving husband for 62 years of the late Marilyn (Chetwynd) Halley. Born in Winthrop, he was raised and educated in Revere, son of the late John and Bridget Maude (Laurie) Halley. Douglas served in the Navy during the Korean Conflict. He was employed in the printing industry, first at Forbes Lithograph in Chelsea and retired as Pressroom Supervisor of Alpine Press in Stoughton.

Douglas was a kind and generous man who could always be found with a smile on his face. He was currently a communicant of St. Denis Church in Douglas, and had been a longtime communicant of Christ the King Church in Brockton. Family meant everything to him. He enjoyed spending time with his family and vacationing at his home in Damariscotta, Maine. He also enjoyed tinkering and fixing things with his brothers. He was an avid fan of all New England sports teams.

Douglas was the loving father of Lori Hippert and her husband Martin of Douglas and the late Debra M. Carey and Dennis M. Halley; grandfather of Chloe and Fallyn Hippert and Gabrielle Carey; brother of Doris Talios of Berlin, MD and the late Sister Mary Dimas, Monica Geehan, Loretta “Sissy” Flahive, Florence LaFreniere, and Walter, Alexander, Paul, John, Herbert, and James Halley. He is also survived by many nieces and nephews.

Visitation will be held in the Conley Funeral Home, 138 Belmont Street (Rte 123) Brockton, Tuesday, June 30, 5-8pm. The funeral procession will gather at the funeral home Wednesday at 10am for a funeral Mass in Christ the King Church at 11am. Burial will be held at a later date. Donations in his name may be made to St. Denis Church, 23 Manchaug Street, Douglas, MA, 01516.