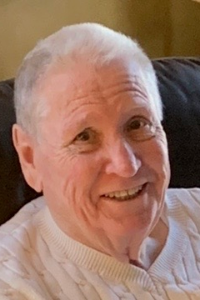 Paul G. Williams, 91, of Leominster, formerly of New Bedford, passed away Friday June 12, 2020 at Keystone Center after a long battle with dementia and COVID 19.

He was preceded in death by his wife of 69 years, Rita; his parents; his sisters, Billie Switzer and Barbara Young; and his brother; Ray Williams.

Paul was raised on a farm in Oklahoma until he entered the U.S. Navy in 1947. After marrying Rita, he lived in New Bedford and raised his family.
He was a devoted Christian, active in the First Baptist Church of New Bedford throughout his life. He worked as at Sippican Corp., Smith Office,
Sears, and Home Depot in various positions until retiring in 2012.

Paul was a loving husband, father, grandfather, brother, uncle and friend. He will be missed by those he touched in life.

The funeral service for Paul will be held Friday July 10, 2020 at 9 AM at the Saunders-Dwyer Home for Funerals, 495 Park St. New Bedford. Visitation will be held from 8:00 to 9:00 AM prior to the service. Burial will follow at the Massachusetts National Cemetery in Bourne. In lieu of flowers please make donations in his memory to the Alzheimer’s foundation at ALZFDN.org or call 1-866-232-8484. For directions and guestbook, please visit www.saundersdwyer.com.