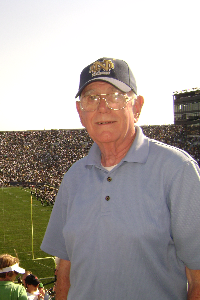 Robert H. Donahue, 86, of North Providence, passed away on Saturday, May 30th in the Philip Hultar Hospice Center, Providence. A devoted brother, uncle, neighbor and friend, Bob will be missed by many and remembered fondly by all that were fortunate to know him.

Born in Providence, a son of the late Laurence J. and Alice (McGinn) Donahue. He was a life-long resident of North Providence, graduating from North Providence High School and Belmonte Abbey College in North Carolina. He served in the US Army and was stationed in West Germany during the cold war.

Robert had been a Postal Worker with the US Postal Service for 30 years, working at branches in Cranston and Esmond before moving to the main post office in Providence. He enjoyed bowling and skiing with his coworkers.

A big sports fan, Bob liked going to Florida for Red Sox Spring training games and the annual family pilgrimages to South Bend, for Notre Dame football games. Over the years, he could always be seen on the sidelines of his six nephew’s sporting events cheering them on and he kept this tradition going for his great nieces and nephews as well. For over twenty-five years, Uncle Bob helped to care for one of his nephews who resides in a long-term care facility in Holden, MA. During this time, he developed great relationships with the patients and medical staff through his kindness, generosity and humor. He raised the spirits of everyone there, especially those residents dealing with serious health challenges.

His funeral was private. Burial with Military Honors was in St. Ann’s Cemetery, Cranston, RI. In lieu of flowers donations in his memory may be made to The Church of Saint Augustine, Twenty Old Road, Providence, R.I. 02908. A memorial service and celebration of his life will take place at a future time.