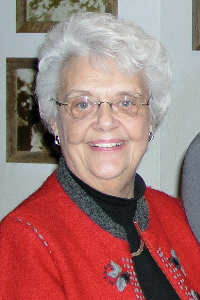 Age 83, of North Saint Paul, Minnesota died peacefully May 30 at Ebenezer Ridges in Burnsville, Minnesota of COVID-19 complications. She was preceded in death by her parents, Rev. Bernhard Rom and Jeanette Anderson Rom; brother Gordon Rom; brother Howard Rom and sister-in-law Janice Rom. She is survived by Dr. Harold R. Broman Jr., her husband of 60 years, as well as their children: Mari (Paul), Kirsten (Kenny), Betsy (Matthew), Harold III “Gus” (Margie), and their 14 grandchildren and families, including 6 great-grandchildren.
Born December 13, 1936, in Madison, Wisconsin, Margaret was raised in a parsonage that offered hospitality day or night. After earning a degree from Madison Business College, she worked in the marketing department at Oscar Mayer, and appeared occasionally in advertising events and images. She married Harold on September 19, 1959, and moved to Minnesota, settling in North Saint Paul on Silver Lake in 1967.
Margaret and Harold served faithfully at First Evangelical Free Church (St. Paul) and were founding members of Lakewood Evangelical Free Church. They hosted yearly baptism services since 1971, at which hundreds of people commemorated a new life in Christ, followed by dinner with “baptismal cookies” -- fragile and fussy confections stamped with love. Margaret served all who crossed her path in Jesus’ name – with pop, treats (“one for each hand”), small bouncy balls from her purse, compliments, and a charge to “remember who you are, whose you are, and have more fun than anybody!” She was “a sunbeam,” and will be greatly missed by friends, family, and residents and staff at The Shores of Lake Phalen, where she and Harold moved last year.
Margaret will be interred at Evergreen Memorial Garden in Oakdale in a private service. Contributions in honor of Margaret may be made to The Salvation Army Northern Division (at 2445 Prior Ave. N, Roseville, MN 55113, or so designated online at give.salvationarmyusa.org).