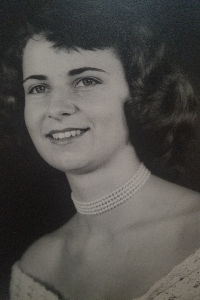 Dawn Cavallaro, 87, formerly of Cumberland, RI and Andover, Mass., died Tuesday, May 26, 2020, after a long battle with dementia and ultimately to Covid-19.
Born in Holyoke, MA, she was the oldest daughter of the late Donald and Ruth (Lane) Dunn. She grew up in Andover, Massachusetts; she moved 26 times as the daughter of a military family and wife of a retail manager. She most recently had lived in Cumberland for 35 years before moving into nursing care at the Hallworth House in Providence.
She is survived by her daughter, Catherine Lipson of Walpole, MA., her sons, Donald Cavallaro of Rye, N.H. and Robert Cavallaro of Las Vegas, N.V., and her three grandsons, Daniel Lipson, Parker Cavallaro and Truman Cavallaro. She is also survived by her sister, Dorothy Roy of Spring Hill F.L. and many nieces and nephews. She was predeceased by her husband Anthony and her daughter Constance Magaw.
Dawn was someone known for her many small kindnesses- sending thoughtful cards, letters or “care packages” to friends, relatives and numerous military service members. She was once thanked personally by a military officer for helping the morale of those under his command. A passion for weather forecasting earned her the nickname “Doppler Dawn.” She was a member of Arnold Mills United Methodist Church and an event planner for the Arnold Mills Community Center in Cumberland organizing art and quilt shows in the 1990s. She was a long time volunteer for the American Cancer Society and the Heart Association
A celebration of her life will be held at a later date due to current restrictions. In lieu of flowers, contributions in Mrs. Cavallaro’s memory may be made to American Cancer Society, American Heart Association, Alzheimer’s Foundation of America, or the USO.