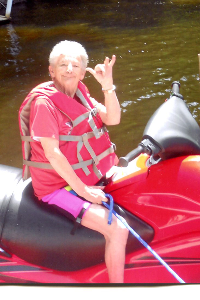 Rose Marie Plante, 86, of Aldrich Road, Glocester, passed away on Friday May 22nd in her home and surrounded by her family.

She was a daughter of the late Edgar A. and Alice (LaRochelle) Plante. She had lived in Glocester for 44 years previously living in Providence.
She was an Army Veteran of the Korean War.

Rose had been an employee with the US Postal Service before retiring in 1989.

Rose loved jet sking, playing cards and she was a member of the Johnston Senior Center.

She was the sister of the late Marguerite Plante and Katherine Plante. She also leaves Adrian Plante, Dolores Goerman and an extended family of a niece and nephew and many cousins.

Her funeral was private. Burial was in Highland Park, Johnston. A Memorial Mass will be held at a later date. In lieu of flowers donations to Hope Health Hospice Care, 1085 North Main Street, Providence, RI 02904 www.hopehealthco.org