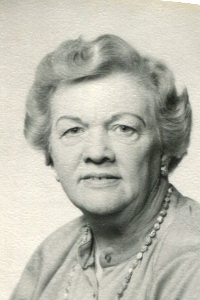 
Kathleen C. “Kay” McAvoy, 102, passed away on Saturday May 23 at her home surrounded by her family.
Born in Providence, a daughter of the late George and Catherine (Gallagher) McAvoy. She had lived in North Providence before moving to Johnston, then to Lincoln.
Kay had been a Librarian with the former St. Joseph Hospital Health and Science Library before retiring.
She graduated from St. Xavier Academy, class of 1936 and had been Past President of the Alumni Association. She was a member of the Fatima Guild. She was a former member of the RI Health and Science Library Association (RIHSLA). A former communicant of St. Thomas Church in Providence, Kay also did volunteer work at St. Edwards’s food pantry after retiring.
She was the sister of the late Clare M. McAvoy and Frances M. Gilchrist. She is survived by nephews and nieces George Gilchrist, Kathleen Perkins, Kevin Gilchrist, Mark Gilchrist and Clare Gilchrist. Kay was also the aunt to the late Ruth Diko and John Gilchrist.
A private funeral was held and burial was in St. Ann’s Cemetery, Cranston. In lieu of flowers donations in her memory may be made to Hope Health Hospice & Palliative Care, 1084 North Main Street, Providence, RI 02904.
www.hopehealthco.org