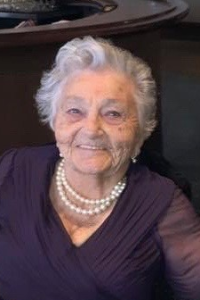 Rose M. D’Orio, 105, formerly of George Waterman Road, Johnston, died Monday, May 25, 2020 at Cherry Hill Manor in Johnston. She was the wife of Francesco “Frank” D’Orio.

Born in Boston, she was a daughter of the late Nicholas and Carolina (Abate) Colangelo. She had lived in Johnston for 87 years.

She is survived by her daughter: Annette C. Piscopiello of Johnston, her granddaughters: Donna-Lee Wilson and her husband, Bradley of Johnston and Brenda-Lee Leone and her husband, Richard of Smithfield, six great grandchildren: Jason, Ashley, Jonathan, Erica, Elise and Giana and five great great grandchildren: Colton, Raegan, Ella, Camden and Bennett. She was the mother of the late Carol A. D’Orio and mother in law of the late Frederick Piscopiello.

Rose enjoyed baking and crocheting, however most importantly she loved caring for her family and friends.

A Memorial Mass will be held at a later date. Donations in her memory may be made to a charity of your choice.