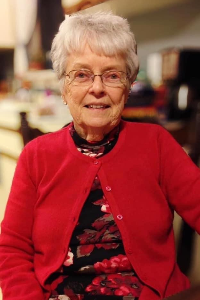 Barbara M. Landi, 89, of Barnes Street, Smithfield, died on her birthday, Sunday, May 24, 2020 at Greenville Skilled Nursing. She was the widow of Leopold U. Landi.

Born in Providence, she was a daughter of the late Francis R. and Madeline (Cooney) Whalen. She had lived in Smithfield for 64 years.

Barbara had worked at S&M Hearth, Patio and Barbeque for 20 years. She had also worked at Rally Point Racquet Club as a secretary/receptionist and as an Anesthesia Secretary at Our Lady of Fatima Hospital, she was also a Girl in White at Providence Gas Company.

She enjoyed Friday nights with her friends at Greenville Inn, needlepoint, and cooking Holiday and Sunday dinners for her family, but most of all she loved making ceramic pieces as gifts for her grandchildren, nieces and nephews.

Her funeral services were private. A memorial mass will be held at a later date. In lieu of flowers donations in her memory may be made to PACE, 225 Chapman Street Providence, RI 02905