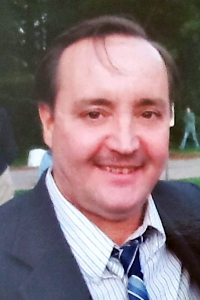 Brian F. “Bozwell” Lizotte, 59, of Indian Trail, Chepachet, died Saturday at his home and surrounded by his family. He was the husband of Laura I. (Sheils) Lizotte. They had been married for 25 years.

Born in Providence, a son of the late Milton J. and Bernice M. (Carty) Lizotte. He had lived in Chepachet for 27 years previously living in Smithfield. Brian had been a self-employed Floor Installer before retiring. He took great pride in his work.

Brian loved to play sports as a child. He often spoke of having had the best batting average in the Smithfield Little League when he was 11 years old. He enjoyed watching his children and grandchildren play baseball and he could often be found tossing a baseball around with them in the yard. He loved being a grandfather to his 10 grandchildren and never went to see them without surprising them with pops. He was always quick to lend a hand to his friends and strangers. All you had to do was ask. He's the biggest Dead Head you know and loved visiting with friends to reminisce. He was kind and generous and made friends everywhere he went. He always wore a smile and was quick with a story in hopes of making you laugh.

Besides his wife he leaves his children, Joseph Lizotte and his wife Nicole Leonard of Katy, TX, Jessica Silva and her husband Jamie of West Warwick, Daniel Lizotte and his partner Larissa Casey, Bridget Lizotte and Haley Lizotte all of Chepachet and 10 grandchildren. He also leaves his siblings, Susan DiBlasi and her partner Paul Desforges of Smithfield, Paul Lizotte of New Hampshire, Gail Murry and her husband James of Smithfield, Neal Lizotte of North Providence.

A private funeral was held. A Celebration of his life will be held at a later date.