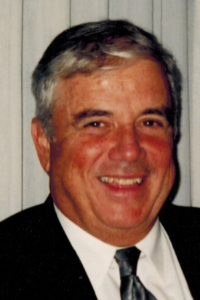 Anthony M. Santucci, 79, of the Saint Antoine Residence, North Smithfield, died peacefully on Sunday April 26th. He was the husband of Elaine C. (Monti) Santucci. They had been married for 58 years.

Born in Providence, a son of the late Michael A. and Antonia “Etta” (Fomicola) Santucci. He had lived in North Smithfield for the last year previously living in Smithfield.

Tony founded and had owned A. Santucci Fruit & Produce Company in Cranston. He had also worked for Luzo Foodservice in New Bedford, MA. He was a member of the Alpine Country Club in Cranston for many years and was past president of the Smithfield Lions and was a communicant of St. Philip Church.

Tony enjoyed spending time with his family and was a lifelong Boston Red Sox fan.

Services will be private. A Mass of Christian Burial will be available to stream on Saturday, May 9th at 11am.

To view the stream of the service, please visit the St. Philip's Church YouTube page.

A memorial mass and celebration of Tony’s life will be held at a later date.
In lieu of flowers, donations in Tony’s memory may be made to the St. Antoine Patient Care Account, 10 Rhodes Avenue, North Smithfield, RI 02896 or www.stantoine.net.