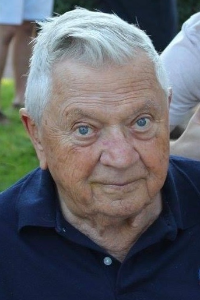 Theodore Patrick, 92, died Thursday, April 23, 2020 in Stillwater Assisted Living and Rehabilitation. He was the devoted husband of Pearl (Sanders) Patrick. They have been married for 68 years.

Born in North Versailles, Pennsylvania, he was the son of the late George and Mary (Semensky) Patrick. After high school, Theodore served in the United States Navy at the end of World War II. He attended Penn State while starting a job at Westinghouse Electric Corporation. For the next twenty years he worked as a manufacturing engineer for Westinghouse in Pittsburgh, and later, as a research engineer in the new field of semiconductors in Baltimore. Ted was instrumental in obtaining a U.S. Patent for his work in integrated circuits. He then moved his family to Attleboro, MA where he raised five children and worked at nearby MetCeram/Rosenthal Corporation in Cranston, RI for the next twenty years.

Theodore was an avid golfer, who occasionally volunteered as a ranger at several well-known golf tournaments in the area. After retiring, he worked part-time as a starter at the Wentworth Hills Golf Course in Plainville, MA. Theodore spent many hours designing and building various woodworking and construction projects and battery-powered remote-controlled model boats. He was an enthusiastic fan of the New England Patriots and Pittsburgh Steelers, and an admirer of golf legends Jack Nicklaus, Sam Snead, and Arnie Palmer.

Besides his wife, he is survived by his children, Martin Patrick of East Greenbush, New York, Suzanne Patrick of Hollywood, CA, Diane Lyon of Sheldonville, MA, and Sharon Laforest of Smithfield, RI, as well as seven grandchildren. He is predeceased by his son, Alan Patrick of Florida and two brothers, George Patrick of Cerritos, CA and David Patrick, of Salem, OR.

Theodore was buried at the National Cemetery in Bourne, MA. Funeral services were private due to COVID-19.