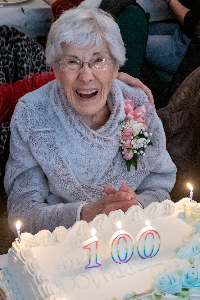 Althea E. Rainville, 100, of Putnam Pike, Smithfield, died Sunday in her home at the Village at Waterman Lake, Smithfield. She was the wife of the late George Rainville. They had been married for 67 years.

Born in Everette, MA, a daughter of the late George W. and Florizel E. (Bearse) Clark. She had lived in Smithfield most of her life.

She had gotten great joy from her mini schnauzer, Sidney.

A private funeral was held. Burial was in Highland Park, Johnston. A Memorial Mass will be held at a later date. In lieu of flowers donations may be made to St. Michael’s Church, 80 Farnum Pike, Smithfield, RI 02917