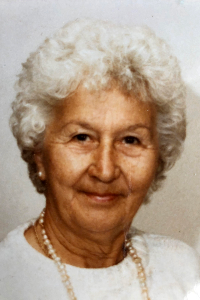 Elizabeth (“Betty”) was born in Dudley, Massachusetts to parents John Vajcovec and Caroline Kasik Vajcovec, who both immigrated from Czechoslovakia. Betty grew up in Webster, Massachusetts with 8 siblings. She moved to Boston and graduated from Massachusetts General Hospital Nursing School as an RN in 1938. She often walked to Fenway Park for Red Sox baseball games and became a big fan.

Betty met her future husband Brad, and they married in 1941, and eventually settled in Greenville, Rhode Island where they raised 5 children: Pat, Chris, Connie, Gary, and Marcy. They especially enjoyed their home on Slack’s Pond, and made many happy memories there.

Betty was a great seamstress and made her daughters’ Easter outfits each year. She loved baking, playing cards, and was a darn-good bowler. She enjoyed spending time with friends at the Smithfield Senior Center and Esmond Village.

She was a faithful parishioner of St. Philip’s Catholic Church in Greenville for over 70 years.

A mass and celebration of her life will be held at St. Philip’s at a later date when gatherings are allowed.

Any donations in her memory can be made to:
St.Philip’s Church, 622 Putnam Pike, Greenville, Rhode Island 02828