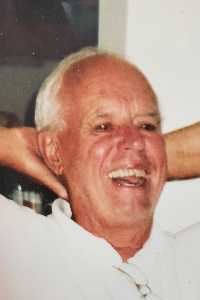 Loving Husband,
Father, Grandpa, Brother, Uncle and Friend
Passed away peacefully at home on April 25, 2020 surrounded by his loving family and went home to be with his Lord Jesus Christ. Preceded in death by his parents Louis Sr. and Margaret (Hudak) Haak and brother, James. Survived by wife, Bette Jayne “B.J.”; children, Christopher (Alesia), Nicolee (Steve) Nelson, & Suzanne (Todd) Miner; 14 grandchildren; siblings, Dave (Marilyn), Mark (Margaret), Mary (Paul) Rice, Andrew (Carol), & Dan; many nieces, nephews and friends.
Louis was born August 3, 1931, in Stillwater, Minnesota and graduated from Stillwater High school in 1949. He then went on to graduate from the College of St. Thomas in 1954 with a BS in Physical Education. Served in the US Army from 1954-1956, stationed in Dachau, Germany with the 287th Field Artillery Batalion. He went on to serve in the Army reserves from 1956-1962. Louis received a MA in Counseling and Guidance in 1958 and a Ph.d. in Statistics and Measurements in 1964 from the University of Minnesota.
He taught Math and coached in Ogilvie, Minnesota from 1957-1959 where he met his wife, Bette Jayne (BJ) Youso. They married on August 13, 1960 at St. John’s Catholic Church in Foley, Minnesota.
He was employed by the St. Paul Public Schools from 1959 to 1996 first as the Supervisor of Administrative Research and later as a Guidance Counselor in a number of secondary schools in the district. He also served as the President and Chief Negotiator for the middle management administrators in St. Paul.
Louis was a man of great faith and his faith was a central part of his daily life and family. He was a long time parishioner of St. Peter’s Catholic Church in No. St. Paul, Minnesota and at the end of his life Transfiguration Church in Oakdale, MN. When Louis could still drive attending daily mass was an important part of his routine.
Louis was a quiet man with a gentle soul and a huge heart. He was extremely humble and resourceful. He enjoyed his independence and being as active as possible to the end. He was never one to complain or say a negative word about anyone. He was extremely proud of all of his children and grandchildren and their many accomplishments. One of his greatest joys in life was being actively involved and watching his children and then many grandchildren in their various sports and other interests.
Private Family Mass to be held on April 30. Memorial Mass at Transfiguration Catholic Church and burial at a later date when social distancing is lifted and all can gather to celebrate his life. Memorials to Haak Education Fund at Transfiguration Catholic Church and School.