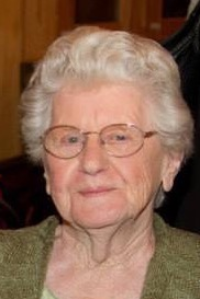 
Marguerite (Peg) Gaquin, 91, of Whitman, passed away peacefully at St. Joseph Manor in Brockton, on Monday September 16th. She was the beloved wife of 65 years to the late John H. Gaquin.

Peg was born and raised in Brockton and was the daughter of the late Michael Brides and Susan (Drew) Brides. She was a graduate of St. Patrick's School.

Peg was a homemaker most of her career, raising 7 children in Whitman. In later years she worked in the Whitman school system and was also employed by Great Elm Greenhouse. She loved knitting, reading and baking her famous Toll House Cookies.

Her funeral services will be held on Friday September 20th at 10:00AM in the Blanchard Funeral Chapel, Plymouth Street (Rte. 58 at the rotary circle) Whitman. Burial will follow in the Saint Michael Cemetery, Avon. Visitation will be held on Thursday September 19th from 4:00-8:00PM.