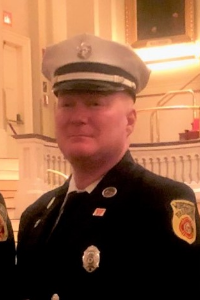 
Auburn – Worcester Fire Lieutenant John R. Kennedy, passed away unexpectedly on Saturday, July 20th in Norwood Hospital after being stricken ill.
Lt. Kennedy was born in Worcester, son of the late Alistair M. and Georgette A. (Vallee) Kennedy. He graduated from Saint Peter Marian Central Catholic High School in 1991 and then proudly served in the United States Navy where he was awarded numerous medals including the Southwest Asia Service Medal with a Bronze Star.
Lt. Kennedy started his career with the Weymouth Naval Air Station Fire Department and is currently a 21-year veteran of the Worcester Fire Department. He became a Worcester Firefighter on September 8, 1997 and was stationed on Engine Co. 1 at the former Central Street Fire Station, Engine Co. 8 at the Burncoat St. Fire Station and Engine Co. 10 at the Park Avenue Fire Station. He was promoted to the rank of lieutenant on Christmas Day, December 25, 2005. Lt. Kennedy was stationed on Ladder Co. 2 at the Grove Street Fire Station, Ladder Co. 4 at the Webster Square Fire Station and has been stationed on Rescue 1 at the Franklin St. Fire Station since September 20, 2015. Lt. Kennedy was longtime member of the Dive Rescue and Special Operations Teams as well as the MA State District 3 Haz-Mat team and worked as an instructor at the Massachusetts Fire Academy in Stow, MA. He was a former member of the Worcester Fire Brigade Pipes & Drums, where he served on the band color guard.
Lt. Kennedy was a member of the Professional Fire Fighters of Massachusetts, Worcester Firefighters IAFF Local 1009 and the Infidels Motorcycle Club. He had a true passion for the fire department and enjoyed every aspect of his career. John was the ultimate Boston sports fan who enjoyed taking trips to the beach, attending concerts and cooking on the grill for his family and friends. His fellow firefighters always looked forward to the nights when Lt. Kennedy would make his tortellini soup. John had a special bond with his two dogs, Ollie and Sophie who will miss him dearly.
Lt. Kennedy is survived by a son, Sean P. Kennedy of Worcester; his sister, Alyson M. Cordio and her husband, Scott of Lancaster; two nephews, Lucas Cordio and Joshua Cordio; his longtime girlfriend, Heather E. Penza of Walpole, MA and many cousins, aunts and uncles including Denis and Elaine Vallee, who were also his Godparents.
The funeral will be held on Thursday, July 25th at 10 AM in Immaculate Conception Church 353 Grove Street, Worcester. Burial with military honors will follow in Worcester County Memorial Park, Paxton. Calling hours will be held on Wednesday, July 24th from 4 to 8 PM in the Alfred Roy & Sons Funeral Home 12 Hammond St. Worcester. Memorial contributions in memory of Lt. Kennedy may be made to Veterans Inc. 69 Grove Street Worcester, MA 01605.
To share a memory of Lt. Kennedy, sign his guestbook, or for directions please visit www.Royfuneral.com
Content is coming soon...
Alfred Roy & Sons Funeral Home
12 Hammond St.
Worcester, MA 01610
508-799-2992
http://www.royfuneral.com