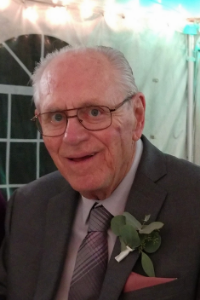 SPENCER: Francis E. Carter, 81, of 98 Maple St., died peacefully, Sunday, Dec. 23, at St. Mary's Healthcare in Worcester, after complications with Parkinson's Disease.
He leaves his wife of 57 years, Louise M. (Wagner) Carter, his son Brian F. Carter of Gardner, his daughters Lynne M.Chalifoux of E. Brookfield and Leslie A. Daniels and her husband Randy of Sturbridge, a sister Marilyn Boucher and her husband David of Old Orchard Beach, Maine, three grandchildren, Kirsten Langill and her husband Brian, Jillian Chalifoux and Jenna Carter, and great-granddaughter, Charley Comeau, who was the apple of his eye. He is predeceased by brothers Earl and Royal Carter and sister Patricia Pritchard.
Fran was the proud owner of Carter Home Improvement in E.Brookfield for many years. He later was purchasing agent at Howlett Lumber in Charlton prior to retirement in 1999. Not one to stay idle, he drove a school bus for ten years and referred to that job as the best part time job he ever had.
Born in Keene, NH., he was the son of Earl and Madeline (Westcott) Carter and lived in E.Brookfield before moving to Spencer in 2016.
He graduated from David Prouty High School in 1955 and received an Associate Degree from Becker Junior College in Worcester in 1957. Upon graduation, he served his country with the U.S. Army Reserves. Fran was an avid outdoorsman who enjoyed hunting, fishing and hiking. He was a long time member of St. John the Baptist Church in E. Brookfield.
Fran's funeral will be held on Friday, Dec. 28 from the J.HENRI MORIN & SON FUNERAL HOME, 23 Maple Terr., Spencer with a Funeral Mass at 10 a.m. in St. John the Baptist Church, No. Brookfield Rd., E. Brookfield. Burial will follow in Evergreen Cemetery, E.Brookfield. Calling hours are Thursday, Dec. 27 from 5 to 7 p.m. in the funeral home. In lieu of flowers, contributions may be made to either Parkinson's Foundation, 200 SE 1st. St., Suite 800, Miami, FL., 33131 or St. John the Baptist Parish, 121 Blaine Ave., E.Brookfield, MA. 01515.