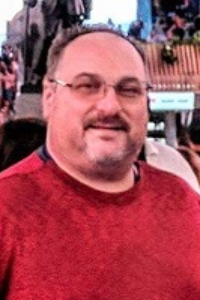 
Athas Tsongalis, 51, of Worcester, died Thursday, December 20th. He is survived by his wife, Lucia (Lamberti) Tsongalis; his children, Samuel and Victoria Tsongalis both of Worcester; his brother, John Tsongalis and his wife, Rhonda of Longmeadow; and his sister, Eudoxia Arruda-Tsongalis and her husband, Keith Arruda of Somerset.
He was born in Southbridge, the son of Sotirios and Eleni (Vlahakis) Tsongalis; and was a graduate of Southbridge High School. Athas then graduated from Nichols College with a Bacherlor's Degree in Mechanical Engineering followed by a Bachelor of Science Degree in Nuclear Medicine from Worcester State College. He had been employed as a computer engineer at EMC. He was an avid New England Patriots Fan and enjoyed attending home games. Athas was an outgoing and social person; enjoying conversation with others and was passionate about politics. His greatest joy was time spent with his family, his children were his life and was delighted to see them achieving their dreams. He was a member of St. Spyridon Greek Orthodox Cathedral.

Family and friends are invited to visit with Athas's family on Friday, December 28th from 5:00 until 7:00 pm at O'CONNOR BROTHERS FUNERAL HOME, 592 Park Avenue.