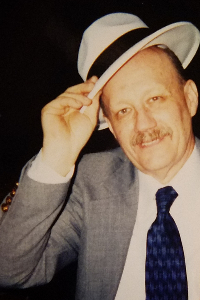 Paul was a car enthusiast and born mechanic. He learned to work on cars in his early childhood in his Mom’s backyard, impressing his siblings with his skills. He went on to run Atlantic Gas Station in Auburn, then Texaco and Amico, both in Worcester. He worked at Linder’s Auto in Worcester from the late 1970s to mid 1980s. He opened P&R Automotive in Grafton in 1987, moving it to Millbury in 1989 where his son Paul Jr. started working alongside him. In 1999, they moved business to Howe Avenue in Millbury. He specialized in repairing steering columns from recovered thefts, custom vehicles, and fuel injection conversions, in addition to doing general repairs.

The family would like to thank all of the loyal customers of P&R Automotive for all the years of support in making Paul’s vision a reality.

In 1987, Paul purchased a 1986 Monte Carlo SS from Linder’s Auto. The car had a light engine fire and he built it over the years into a show car, affectionately naming it “The Heartbeat Express.” He proudly owned it and before he died passed it to his son, Paul Jr. He was a member of Friday Night Cruizin’ in the early 90s, helping run the show and judge vehicles alongside some of his lifelong friends. Paul was a member of the National Monte Carlo Owners Club where he enjoyed going to car shows with Grace and Paul Jr. For over a decade, they traveled as far as KY and OH for club meets, making new friends along the way. He won many awards thru the years for “The Heartbeat Express.” He enjoyed building hot rods and working on classic cars. He also enjoyed drag racing for many years, racing with his ‘62 Chevy 409, ‘57 Chevy Nomad gasser and his ‘64 Chevy Nova II named “Whatever Turns You On.”

Paul had 4 brothers and 2 sisters: Ronald (late), Donald (late) and wife Shirley, Robert, Roger, Nancy and husband Robert Hendrickson, and Carol Nordquist. He leaves his son and daughter-in-law, Frederick and Luz; daughter Linda Santagata; son Richard; daughter and late husband Tammy and Kris Carlson; and son and daughter-in-law Paul Jr. and May. He leaves 12 grandchildren, 6 great grandchildren, many nieces and nephews. He loved his family deeply and felt blessed to have enjoyed years of watching all the “kids” grow up and have kids of their own.

The family would like to thank family and friends who came to see him in the past few months. It meant more than words can express.

In lieu of flowers, the family asks contributions to be made to the American Cancer Society.

At Paul Sr.’s request, he will be cremated and there will be no funeral services. However, Paul Jr. is planning a Paul H. Rosenlund Sr. Celebration of Life Car Show for the spring of 2019. For information, please call or text Paul Jr. at 508-868-6211. There is also a Facebook event created.

To leave an online condolence message, please click on link.