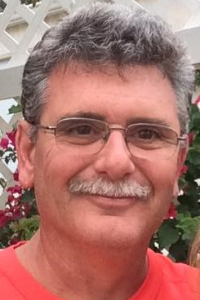 Kevin Duane Taylor was born in Jasper, Indiana in 1962 to Donald and Evelyn Taylor. Kevin lived in Indiana until 1972 when his family moved to White Deer, Pennsylvania. There he attended school in the Milton School District until his family returned to Indiana in 1979 where he graduated high school the following year.

Kevin was blessed twice with loving marriages. He met Karen Bigger in Ohio when she came to his door selling magazines. They eventually married in 1986 after Kevin enlisted in the US Army. They lived briefly in Arizona before shipping out to Camp Darby in Italy where they lived for five years. While serving in Italy, their two children, Curtis and Jan Elyse were born. The family explored many European countries and made many lifelong friends. After his honorable discharge, they moved back to Indiana where Kevin attended ITT Technical Institute and earned an Associates Degree in Electronics Engineering. They then moved to Karen’s hometown of Worcester, MA, where they raised their family. He was a very loving and devoted father, who never failed to make his children laugh or provide a good time. Kevin lovingly cared for Karen during her four-year battle with breast cancer until her death in 2010. With still so much love to give, he reconnected with his childhood friend, Lorena Sampsell, where love then bloomed. They married in 2013, and spent their time enjoying each other's company at their homes in Pennsylvania and Florida.

Kevin was employed for the past 20 years as a senior service engineer at Bruker Daltonics. He traveled across the United States and to many other countries servicing mass spectrometers, and was looking forward to retirement in 3 years. Earlier in life he was a machinist, a skill he learned from his father, and also worked as a certified electronic technician.

Kevin had a deep respect and appreciation of the outdoors. As a young Boy Scout, he spent much time in the mountains and forests near his family’s home in White Deer, Pennsylvania. In recent years, he returned to that area that he loved so much and built a home along the White Deer Creek with Lorena where they enjoyed hiking, campfires, and outdoor cooking. He particularly enjoyed warmer weather and had a winter home in Haines City, Florida. He adored palm trees and was thrilled to have many in his yard, along with other beautifully maintained tropical plants. He was happiest when he had a project in the works and a to-do list; do-it-yourself home renovation, gardening, and planting were ongoing. Many family hours were spent improving each house and yard, in which he took great pride.

Kevin was adventurous and loved zip-lines, dirt-bikes, go-carts, and spending time in the woods. He was an H3 hang glider pilot and practiced the sport in Massachusetts, New Hampshire, Virginia, and Florida. Riding his Gold Wing motorcycles with Lorena was another favorite past-time. Together, they enjoyed sightseeing, sunsets and ice cream outings close to their homes; they ventured on longer road trips to New Orleans, the Smoky Mountains, and Niagara Falls. Kevin also enjoyed swimming in the family pool in Worcester, and in the summer he would do his annual “gainer” back-flip off the diving board to challenge his youth. He successfully completed his 56-year-old gainer this past June.

His family knew him to be ultra-organized and teased him about his love of spreadsheets, receipts, and label-making; this was balanced out by his free-spirited attitude and living life on his own terms. He is remembered for his positive attitude, kind and generous spirit, lively sense of humor, and passion for life. He is deeply missed by countless family and friends around the world.

A celebration of life will be held at a later date. There are no calling hours. In lieu of flowers, donations in Kevin's memory may be made to The Fisher House Foundation which assists military families (www.fisherhouse.org). To leave an online condolence message, please click link.