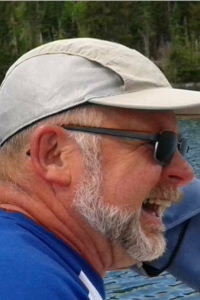 Dennis Michael Lydon, 65, of Wells, ME, died Friday, July 27, 2018 at his home. Dennis was born on January 9, 1953 in Portland, ME, a son of the late Joseph and Candace (Baldwin) Lydon. He graduated from Cheverus High School and went on to earn his associates from SMVTI in Marine Sciences. He worked ten years as a captain on off shore tug boats. Later in life he went on to get his degree in business administration at Daniel Webster College. He spent most of his life working in the crushed stone and redi mix concrete industry.

Dennis was a voracious reader. He could be found hiking daily with his best friend Bentley. He also loved sailing and spent his summers up and down the coast of Maine. He enjoyed spending time with family and friends, and was active volunteering with community service in Raymond, NH.

Dennis is survived by his life partner, Bonita Kershaw of Wells; two daughters, Andrea Lydon of Gray, ME, and Coral Lydon Ovitt and her husband Patrick of Windsor, VT; two grandchildren, Eve and Patrick Lydon Ovitt; his brother, Mark Lydon of Durham, ME; as well as several nieces and nephews.

Following cremation, calling hours were held on Tuesday, July 31st from 4 – 8pm in the Peabody Funeral Homes and Crematorium, 15 Birch St., Derry. A Mass of Christian burial was celebrated on Wednesday at 10:00am in St. Thomas Aquinas Church, 26 Crystal Ave., Derry. The burial followed in the Forest Hill Cemetery in E. Derry. The family wishes to thank the staff at VNA Home Health and Hospice for all their help. In lieu of flowers, memorial contributions may be made to the Raymond Coalition for Youth, 4 Epping St., Raymond, NH 03077, or online at: www.rcfy.org/donate. Dennis was very active in the community and would also encourage volunteer work for the RCFY.