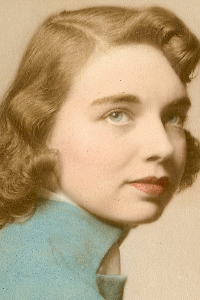 LEICESTER: Hazel M. (Miner) James, 85, of Henshaw St. in the Rochdale section of Leicester, died Monday, July 23 in St. Vincent Hospital after a brief illness.
She leaves her husband of 65 years, Frank W. James, her son Mark S. James and his wife Christine of E.Broookfield, her daughter Leslie A. McDaniel and her husband Timothy of Sturbridge, her sister Martha Walker of Charlton, four grandchildren; Meredith Marum and her husband David of Worcester, Byron James and his partner, Julie Ells of Worcester, Kelly Ronca and her husband Vito of Quincy, and Casey McDaniel and her partner Zach Barken of Norfolk, VA., four great grandchildren; Lillianna, Braighlynn, Evie and Connor, several nieces and nephews.
She was predeceased by her brothers Robert, Earl and Russell Hanson, sisters Georgina L'Homme, Blanche Richards, Shirley Rankin and Jeannette Goulden.
Hazel worked as a bookkeeper for the former Marcus Co. in Worcester for 25 years, retiring in 1987. She then began a career in crafting with her sisters Jeanette and Martha. They began their endeavor, calling themselves "The Three Sisters' crafters". Their success lead them to begin the "The Bittersweet Craft Shop" in Charlton. Hazel and her sisters spent many hours crafting, reliving stories and laughing. Her favorite times were those spent with her family, her children, grandchildren, and great-grandchildren.
She was born in Worcester, the daughter of Bradford and Carlotta (Bartholomew) Miner and later graduated from Commerce High School.
Family and friends are invited to celebrate Hazel's wonderful life with visitation from 4 to 6 p.m. in the MORIN FUNERAL HOME, 1131 Main St., Leicester on Friday, July 27. Burial will be private in Worcester County Memorial Park, Paxton. Please omit flowers, memorial donations may be made to a charity of choice.