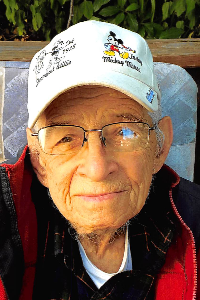 Philip W. Kupfer, 92, a lifelong resident of Worcester died Sunday, March 25th surrounded by his loving family. His wife of 47 years, Gladys (Carlson) Kupfer died in 1996. He leaves his children, Linda C. Mahlert of Brimfield, Karen M. Brown and her husband, Thomas with whom he lived, David P. Kupfer and Richie K. Kupfer and his wife, Susan all of Worcester; nine grandchildren, Robert Mahlert, Jennifer Brown, Katie Do, Jessica Brown, Kristy Kupfer, Krystal (Kupfer) Crocker, Bridget Kupfer, David Kupfer and Kirsten Kupfer; five great grandchildren, Linneah, Kylie, Shane, Lea and Tyler and many nieces and nephews. He was predeceased by a brother, Earl Kupfer and two sisters, Dolores Nelson and Winifred Dallair.
He was born in Worcester the son of George H. and Blanch (Savageau) Kupfer. Philip was a veteran of the United States Army serving during World War II. He worked at Crompton and Knowles where he worked as a tool grinder for many years as well as Maury Delicatessen.
Mr. Kupfer was friendly with everyone and enjoyed spending his time walking and talking with others. He lived his life for his great grandchildren. Mr. Kupfer made wooden chairs for children, enjoyed scratch tickets and summer squash. Phil’s favorite pastime was spending time with his friends at Plywood Plus. He was a great dad and will be dearly missed.
His funeral is Thursday, March 29th with a service at 10:00 AM in O’CONNOR BROTHERS FUNERAL HOME, 592 Park Avenue. Burial will follow in All Faith’s Cemetery, 7 Island Road. A calling hour will be held from 9:00 AM until the start of the service.