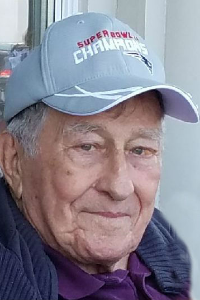 Carl Erwin Sidney Bruhn, Jr, 86, of West Boylston, passed away peacefully at St Vincent Hospital in Worcester, surrounded by all of his surviving children and many grandchildren on Sunday, March 18, 2018.

Carl was born in Denver, Colorado, the son of Carl Edward Bruhn, Sr, and Beulah (Echternacht). Carl was a staunch Coloradan with a love for that area that never relented. Carl joined the armed forces and served in the United States Navy. Carl met his wife of 60 years, Margaret (Tanona), at Chelsea Naval Hospital in Chelsea, Massachusetts. After being discharged from the service, Carl and Margaret married and moved to Denver where they started their family. After their eleventh child was born, the family moved to West Boylston, Massachusetts to be closer to Margaret’s side of the family.

Carl was a civic minded citizen, always willing to pitch in and help out. Carl held positions as the West Boylston Parks Commissioner, as President of the West Boylston Housing Authority, and as a Mental Health Advocate. As past President of the West Boylston Athletic Association, Carl was awarded the Cuzzy Mingolla Award for his dedication to student athletics. The Bruhn children, following in Carl’s steps and all athletic by nature, could count on Carl’s presence (and boisterous voice) at sporting events. Beyond his love of family, Carl found great pleasure in gardening, painting, coloring and football (primarily Patriots, but could on occasion be found rooting for the Broncos).

“Family Day” brunches on Sundays at the Bruhn house were different from week to week. Family members could count on this brunch as the place to gather and visit with any number of family members who showed up to laugh, eat, and build memories. Many “shared” birthday celebrations were conducted on these days. Carl reveled in being surrounded by his nineteen grandchildren, thirteen great grandchildren, all of whom will miss him dearly. Numerous nieces and nephews rounded this family out.

The family would like to extend our thanks and gratitude to the staff at Christopher Heights Assisted Living and Summit Elder Health Care for their care of our patriarch.

We will miss you Dad – give our love to Mom, Fran and Mike.