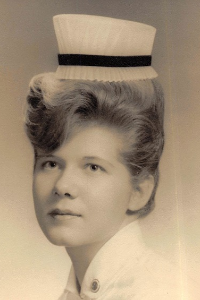 Mary L. (Engstrom) Serwecki, 75, of Auburn, died Tuesday, March 13th in St. Vincent Hospital. She is survived by her husband, Bruce S. Serwecki; her son, John Serwecki of Casper, WY; her daughter, Krysten Cole, and her husband. John of Pawtucket, RI; her sister, Claire Gurlitz and her husband, Ezard of Worcester; a granddaughter Shannon DeMello and two great-grandchildren McKenzie and Grace.

She was born in Worcester, the daughter of Eric Z. and Mary E. (Baker) Engstrom. Mrs. Serwecki was a graduate of the former Worcester City Hospital School of Nursing. SHe had worked as a nurse at a nursing home in Uxbridge.