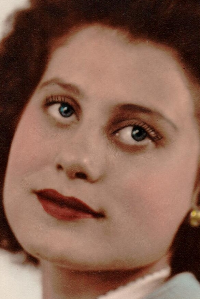 WEBSTER - Vada Mae (Eggers) Barrett, a “Steel Magnolia”, age 88, passed away in her own home in the early morning hours of March 5, 2018. Her passing was imminent as she had steadily declined, both physically and cognitively, over the last 4+ years, leaving her family with a deep yearning for the love of Vada they had known before the strokes & onset of dementia rendered her incapable of being the strong, self-reliant woman she always was. To her family’s delight, she remained spirited to the end! Her loving husband of 63 years, John Alton “Jack” Barrett, died on October 9, 2017.

Vada also had a special place in her heart for her many nieces and nephews, their husbands, wives, children, grandchildren & great grandchildren, from New England to Virginia & beyond! The Martins & Cote-Cyr families were like her Northern family and were among her closest friends.

Vada was born & raised in a strict Southern Baptist home on a farm in Forest, Bedford County, Virginia on the outskirts of Lynchburg, on June 2, 1929. She was a daughter of Charles Franklin Eggers, Sr. and Bonnie Lenora (Perry) Eggers, and was one of eight children.

Vada, the rebellious one, followed the love of her life to Massachusetts, where she married Jack at his family’s farm on Cudworth Road in Webster on May 29, 1954. They settled in a humble home on the shores of Webster Lake at Colonial Park where they raised their family. Vada was a stay at home Mom for many years before going back to work. She was always hard-working, conscientious, and very adept with her hands. Vada & Jack were owners and operators of Mothers Market in Webster for 5 years. She worked as a spinner in a textile mill, and later on from home, where she assembled component parts for their business, Barrett Stitching, Jack’s leather goods manufacturing company.

Jack & Vada, lovingly known as JAVA, were inseparable in their later years. They lived many happy years on Prudence Island RI and travelled all over Narragansett Bay in their good ship JAVA, often with grandchildren in tow. Vada was really a landlubber at sea, more comfortable with two feet on the ground! They adventured off to Rocky Point Amusement Park, Newport for the Tall Ships, Dutch Island for camping, Block Island & Cuttyhunk Island for hiking, fun & a little romance. She could dig clams like a pro and taught the grandchildren how it was done, but SHE would never think of eating them, blah!

Vada had a green thumb and loved to garden. She canned the old fashioned way every year – tomatoes, garden special green beans, jams & jellies & pickled beets. Jack lovingly called her the Food Dude as she had her way in the kitchen! She was famous for her potato salad & banana pudding at Barrett Family Reunions!

They say that “Actions Speak Louder than Words”, and you’d better believe it! VADA was a woman of few words and strong action! She may not have been able to get a word in edgewise, amidst her husband Jack’s constant discourse about world events, politics, poetry & music, the meaning of life, and on and on; but, make-no-mistake, Vada was the very backbone of the man & family she loved! Vada was a powerful force to be reckoned with, with plenty to say behind closed doors!!

Vada had a strong moral compass! She taught her family basic values to live by; like integrity, compassion, kindness, and respect. She was a somewhat serious Mother, (it was, after-all, a serious endeavor), nonetheless, deeply nurturing, kind & loving; and then, out of the clear blue ~ she became a care-free and absolutely fun-loving “Gram” with her grandchildren!

Her family learned their lessons well, rose to the occasion to love and care for her tenderly. They are now among the knowing, a bit raw from their experience, but humble and full of respect for the caretakers of the world! Our sincere appreciation and thanks to Becky Farren, CNA of Heritage Home Health Services of Sturbridge, the many kind and patient souls at Accord Adult Day Center in Webster and Suzanne & Stephanie from Laura’s Guardian Angels.