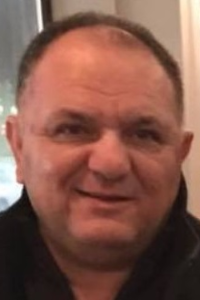 Vincenc "Enci" Kola, 56, born in Tirana, Albania, passed away peacefully at UMASS Medical Center ICU, surrounded by his family and close cousins. He is survived by his wife Sonila, his two kids, Michael and Megi; his in-laws Dhurata and Gazmend; his uncle Zhani and sons; his family in Albania including his mother, two brothers, two sisters, cousins and loved ones.
Enci immigrated to the United States in 1985 and worked hard to provide for his family back home while working doubly hard to achieve his dream of becoming a US citizen. He returned in 1992 to his hometown Tirana, where he continued to work hard for the next 20 years, getting married and having two wonderful kids. His dream was to come back to the States to provide his family and his children the best opportunity to succeed in life and achieved that goal.
Enci was a man of sacrifice, putting others well-being before his own. His family and children were his priority until his last breath. He will always be remembered as a good person, a great friend, a devoted husband, and a great person to be around. The world lost a great man. Rest in peace Enco.
His funeral is Tuesday, March 6th at 11:30 a.m. from O'CONNOR BROTHERS FUNERAL HOME, 592 Park Avenue, with burial following in Hope Cemetery. Calling hours are Sunday, March 4th from 4:00 until 6:00 p.m. in the funeral home.