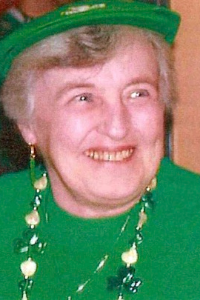 Chicopee - Ellen J. Arseneault , formerly of Worcester, died peacefully on Monday, the 26th of February, at the Hospice at the Fisher Home, Amherst.

She was born on May 30, 1942 to her beloved mother, Ellen (Horgan) Arseneault and her father, Allen Arseneault, both of whom predeceased her. She was also predeceased by her brothers, Allen and Stephen Arseneault of Worcester, and her nephew, Danny Arseneault.

Ellen, better known as “Auntie El”, leaves eight nieces and one nephew whom she loved and “spoiled” whenever she could. Among them her niece, Carolyn Arseneault who was more like a daughter, after the death of her brother, Allen. In addition, she leaves twenty-four grand nieces and nephews and many special cousins. July of 2016 brought her first great grandnephew.

She graduated from Worcester State College and did further studies at several other colleges. Her happiest school days were spent at St. Stephen’s Grammar and High School from 1947 to 1959. Several of her classmates remain good friends to this day.

Over the course of her life she worked at a variety of jobs, including factory worker, supermarket clerk, teacher, parish minister and more. Before retiring in 2009, she worked as an accountant for nearly thirty years with and for her friends, Colleen and Ray Rondeau at Masse’s Seafood in Chicopee, MA. Colleen died on June 3rd, 2015.

Since moving to the Chicopee area in 1970 to join the Sisters of St. Joseph for a time, she made many special friends. She was always grateful for the love and kindness shown to her. Though too many to name, a few stand out…you know who you are as your visits and endless support were special to her. Last, but by no means least, Ellen as well as her family, are extremely grateful to the team of caregivers from Baystate VNA/Hospice, and most especially to her newest family at Fisher Home whose loving care sustained her to the end. Their TLC was a constant Blessing, bringing Comfort and Peace.

In 1992 Ellen fulfilled a lifelong dream of visiting Ireland. She immediately fell in love with Ireland and its people. All who knew her can testify she was nothing if not Irish. Often heard to say how blessed she was to have crossed the pond twenty-nine times. Her favorite place on the Emerald Isle (in addition to Knock, County Mayo) was Castlebellingham area of County Louth. Over the years, through her many trips “home”, she gained a Second Family whom she dearly loved and was forever grateful for. She was often heard to say, when I die, I hope people will say, “I was the most Irish person they ever meet, who was not native born”. That is how much she admired the “Irish Way”.

Be assured she is now busy preparing a “hooley” in heaven, as she deeply believed we would all one day celebrate together. Sure n’ God knows, she is running errands in her shamrock covered vehicle. Today she says to us be at Peace and continue to Love one another.

A Mass of Christian Burial celebrating Ellen’s life will be held on Saturday, March 3, at 11a.m. at St. Stephen’s Church, 357 Grafton Street, Worcester with her cousin, Rev. John Horgan as principal celebrant. A special guest singer, Dee Reilly, will perform The Hymn To Our Lady Of Knock. Burial will follow at St. John’s Cemetery, Worcester alongside her loving mother.